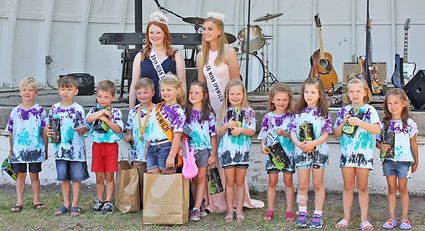 After the parade, the Ipswich Commercial Club revealed the winners of the 2018 Miss Ipswich and Mister Ipswich competition. The winners were Charlee Kessler and Tucker Habeck.

Seven girls and four boys had a picnic and did a craft project Friday evening. The judge observed the children and scored them based on personality, kindness and participation.

Saturday afternoon there were other activities in the Library Park also. Sherwin Linton performed in the Bandshell. There were several booths for the annual Arts in the Park. Youth were invited to try the Pedal Pull.

Sherwin Linton and band in the Bandshell