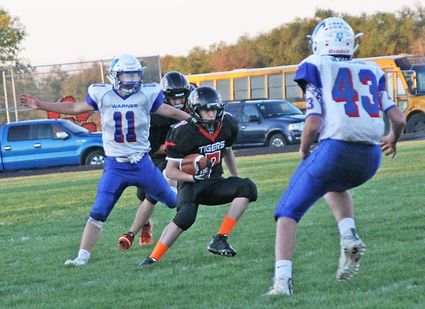 Ipswich-Edmunds Central hosted LRC rival Warner Area for an Ipswich homecoming event last Friday, but the visitors eventually celebrated with a 27-2 victory over the Tigers.

They might have started their celebration after an early interception planted them on the Tiger 39-yard line! And shortly thereafter the Monarchs did dent the Tiger endzone with a one-yard pass play from Ben Fischbach to Daylin Simon. (Spencer Ketterling kicked the PAT for a 7-0 lead with 8:37 showing on the scoreboard clock.) But the hosts weren't about ready to concede things at that point of the contest, especially during the first half. Special teams play and a stingy Tiger defense helped hold the Monarchs at bay for the rest of the half. Indeed the Tiger safety came with 2:54 left in the half, when a high snap to the punter went over his head and out of the endzone.

Ipswich-EC also got a free kick out of that deal and pretty decent field position, but the Monarchs defense would bend but not break. Indeed the Tigers would put more than one time-consuming drive into the redzone, but were unable to cap them with scoring plays. The visitors then started the second half with a scoring opportunity not generated from their line of scrimmage but from the Monarchs own special teams unit. They returned I-EC's opening kick of the second half with a 70-yard burst by Simon and a 13-2 lead. The visitors would then add another third-quarter scoring drive, capped by another pass from Fischbach to Simon of three yards, plus a successful conversion play for a 21-2 lead with a quarter to play. They added a fourth-quarter TD for insurance purposes, this one a 13-yard scamper by Simon, who would account for all four Warner touchdowns.

Warner rolled up 265 rushing yards, led by Simon's 195. They also obtained 52 aerial yards by Fischbach who was 5-9. Meanwhile, I-EC gained 119 rushing yards, led by Riley Nehlich with 50. Carter Heinz added 24 and Daniel Braun, 23. Luke Peterson and Ben Kulesa chipped in with 10 yards each. Kulesa was also 12-22-1 in passing for 108 yards. Nehlich caught two passes for 38 yards and Braun totaled five receptions for 26 yards, followed by Kaden Hix with one reception for 15 yards and Heinz another for 13 yards.

Defensively, I-EC totaled 41 tackles and was led by Braun with 11 tackles, followed by Thomas Goetz with seven, Kulesa with five and Nehlich and Matthew Hettich with four apiece. The team added nine sacks, led by Heinz with three and Braun with two.

The loss dropped I-EC to 2-4 overall and 1-3 in league play. Warner improved to 5-1 overall. Ipswich-Edmunds Central will next host Kimball-White Lake in Ipswich this Friday as part of the Edmunds Central homecoming activities. That team had also lost a decision to Wolsey-Wessington last Friday.