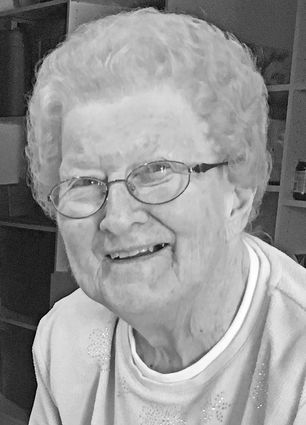 Florence Thelma Schuh, daughter of Matilda (Schmidt) and Jacob Schuh, was born at Isabel on August 15, 1925. The family farmed near Isabel until 1936 when they relocated to a farm three miles south of Artas. The next year they moved to a farm near Java and in 1940 purchased a farm four miles southwest of Bowdle. Florence's education consisted of rural school and Bowdle High School. Following her schooling, she stayed at home and worked on the farm.

Florence married Otto H. Bollinger at Bowdle on December 3, 1944. They farmed six miles southwest of Bowdle until 1946. They then moved to a farm one mile west of Bowdle. Otto died September 30, 1970. Florence then worked as a cook at the Bowdle Nursing Home and was also employed at Mertz Floral.

She married Erwin Gramm at St. Paul Lutheran Church in Bowdle on October 21, 1978. They first lived at Erwin's farm north of Hosmer. In February 1981 they moved into a new home in Bowdle that Florence's son, Allan, built. Erwin died August 26, 2016.

Florence was a member of St. Paul Lutheran Church and the ladies' group (WELCA). She also was a longtime member of the ABC Extension Club. Her hobbies include sewing, cooking, and baking. She also patched countless articles of clothing for her family.

Honorary bearers were the caring staff at the Bowdle Nursing Home, Florence's home the past three, as well as her granddaughters, Wendy Jackson of Fargo, Melody Bokinskie of Clark, Abby Bollinger of Mitchell, and Jamee Bollinger of Turlock

Services are in care of Lien Funeral Home, Bowdle. Visit http://www.MillerLienFH.com to leave an online condolence or to view the tribute video.