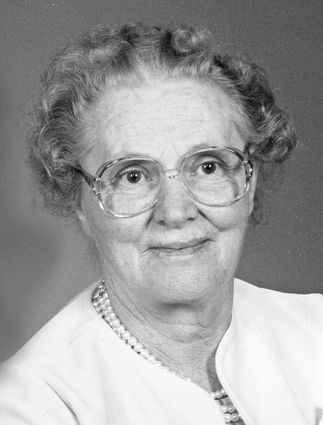 Olga Schneider, 90, Ipswich, died Sunday, October 21, 2018 at her home. Funeral services were at 10:30 a.m., Friday, October 26, 2018 at the Ipswich United Church of Christ with Pastor Tim Fugman leading the service. Interment was at 3 p.m. Friday at Sunset Memorial Gardens, Aberdeen.

Olga Inis Pietz, daughter of Emila (Bashans) and Rubin Pietz, was born near Hosmer in McPherson County. She attended country school and was then employed at the Lutheran Home in Eureka. In 1947 the family relocated to a farm five miles south of Roscoe.

Olga married Henry "Hank" Schneider at Miller on November 29, 1956. They settled on Henry's farm 10 miles northwest of Ipswich where he and Olga worked side by side for many years. In 1975, they semi-retired and moved to a farm one mile north of Ipswich where they continued raising cattle. They retired in 1982 and moved into Ipswich. Hank died September 8, 2003 and Olga lived the rest of her life in Ipswich.

Olga's hobbies included crossword puzzles, crocheting and embroidering. Olga will be remembered as a devoted caretaker, first for her mother when she moved to Ipswich and then for Hank in his later years. The family thanks Olga's caregivers, who over the last five years made it possible for her to remain in her home.

Olga is survived by her son, Scott Schneider of Aberdeen; one brother, Raymond Pietz of St. Lois Park, Minn .; and one sister, Ida Hannon of Aberdeen.

In addition to Henry, Olga was preceded in death by her father on October 11, 1985, her mother on February 13, 1994, one sister (Lenora Mertz) and one brother (Melvin Pietz).

Musicians were Emily Kadlec and Robert and Evie Pond. The usher was Jerry Brooks.

Services are in care of Lien Funeral Home, Bowdle. Visit http://www.MillerLienFH.com to leave an online condolence or to view the tribute video.