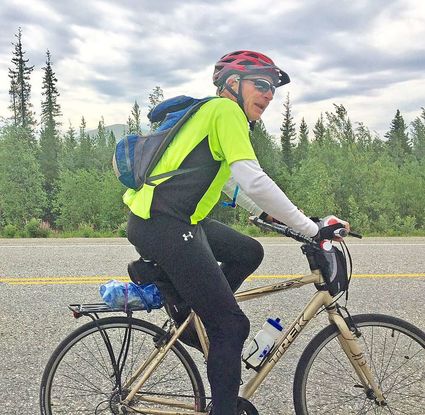 Gary Wietgrefe on the trip.

It is not unusual to put three thousand miles on a vehicle during the summer. Three thousand miles on a bicycle in 40 days at age sixty-five-that's intriguing. Bicyclist, Gary Wietgrefe, started in Pierre with a goal of North Pole, Alaska. To be exact, 2,998 miles later he passed Santa Claus House and a pen of reindeer to arrive unscathed at his nephew's home in North Pole.

Wietgrefe retired in 2012 and often dreamed of bicycling to Alaska. "After I turned 65, I thought this was a good year to try it," said Gary Wietgrefe, an Ipswich native and life-long South Dakotan. "Our nephew and famil...