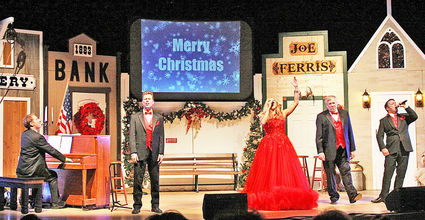 What a second half of the year!

GROW South Dakota hosted a QuickBooks Workshop at the First State Bank in Roscoe on July 12.

Verna Kay Boyd gave a talk at the Marcus P. Beebe Library on Monarch Butterflies and their endangerment. And Tiger Post students helped by planting a garden of beneficial plants that are favorable for them and then they released some Monarchs into the garden on July 16.

Jake Perrion got a hole in one at the Split Rock Country Club golf course in Ipswich on July 18. He is the grandson of Jan Perrion and the late Duane Perrion.

Lawns, gardens and crops brightened up with some timely mid-summer rains around the area.

The Edmunds County Relay for Life was held on Friday, July 20 at the Ipswich sports complex from 6 p.m. to midnight. The Relay for Life is a fundraiser for the American Cancer Society and included luminaries honoring cancer victims and survivors.

Ket Markovetz, 93, of Ipswich, was surprised by 93 new Pink Flamingos around her yard on her birthday.

A First Baptist Church of Ipswich Sunday night bandshell concert had to be moved into the church itself due to inclement weather, but a large appreciative crowd of listeners still got to watch and hear the Prairie Harmony Singers’ performance.

The 4-H Achievement Days were held in Ipswich on August 1-2-3 at the 4-H grounds in Ipswich. Josie Sylte was the Queen and the Cloverbud Princess was Ava Bauer, while Grayson Beyers was the Cloverbud Prince. Many project and livestock exhibitors would later attend the State Fair on Huron, where they also did quite well.

August was Back-to-School month, including fall sports pre-season practices and games. But there were still some area summer events remaining to be sorted out, one of which was the summer dance recital performed by the students of Ashley Geist-Cusick on August 25 at the Ipswich School Theater. And baseball was the topic of some coffee talk sessions, as the W.I.N. (Warner-Ipswich-Northwestern) Junior Legion baseball team attended their State B tourney in Winner. They defeated Clark in their opener and eventually finished fourth. The W.I.N Teeners also participated in regional tourney action. There was also plenty of girls’ softball action during the summer, as well as kids’ baseball.

And speaking of school, there were three new teachers in Ipswich this school year, Valerie Duncan, Tyler Severson and Carlee Wika.

The Pioneer Village and the Parmley House held their respective open houses on August 26.

Kiera Ball spoke about her new novel “Lost Boys of Sudan” at the Marcus B. Library in Ipswich on September 15.

The annual Powell Church service was held on September 16 at the Pioneer Village in Ipswich.

Homecoming week in Ipswich began on September 17, starting with the coronation program. The Royal Court consisted of Queen Kamryn Heinz, Bailey Hammrich, Aleah Steger and Taylor Maurer and King Ben Kulesa, Jacob Nierman, Riley Nehlich and Danial Braun. Carter Heinz and Ethan Gilbert were the 2018 Marshals. One of the other highlights of the week was a colorful parade featuring the award-winning Ipswich High School Marching Band. Homecoming activities also including a pair of homecourt volleyball matches and the Tigers hosted Warner in their football showdown. Ipswich then sent its cross country team to Miller the following Monday, where the IHS girls won an invitational.

Pastor Enno Limvere of the Ipswich UCC gave his final sermon on September 23 and the church honored him with an open house. He is now pastor of the Brentford UCC and their former minister, Tim Fugman, is now supplying the UCC pulpit duties here.

The Ipswich High School Marching Band, under the direction of Becky Nierman was indeed winning awards and recognition this past fall, including a Gold at the Gypsy Day Parade in Aberdeen. The band then raked in even more honors at the Groton Marching Band Festival, as the Band of Distinction, just to name one.

Hunting season attracted a flock of hunters in search of pheasants.

Some Edmunds County 4-Hers were able to attend an Aberdeen Wings hockey game thanks to tickets donated by the Agtegra Cooperative.

The Ipswich Care and Rehab hosted its own version of an Octoberfest on October 26.

Ipswich Art students did well during an October 30 workshop at NSU in Aberdeen, topped by Olivia Gohl’s second-place finish.

There were also plenty of Halloween-related events and activities to close out the month.

Meanwhile, October marks the beginning of the fall sports post-season drama, starting with cross country. The IHS girls did particularly well during the cross county season, including conference and regional titles punctuated by a second-place finish at the State B. Those runners were Aleah Steger in seventh, Tessa Kilber in 14th to also medal in the top 25, Emily DeRaad 33rd, Ashley Ptacek, 53rd and Kari Kanable 59th. Maxwell Geditz was the lone IHS boy this year and he finished 50th. Ben Kulesa was unable to compete due to an injury.

The Ipswich/Edmunds Central football team also qualified for the play-offs with a 3-5 mark, capped by its upset-win over North Border to cap the regular season. The Tigers traveled to Freeman to face Canistota/Freeman in the first round, but the hosts won.

Meanwhile, the volleyball girls ended their regular-season slate with an 18-11 mark. They defeated Potter County in their regional opener but were stopped by Faulkton in one of the bracket championship clashes. Faulkton indeed later qualified for the State B.

The Edmund County 4-H Recognition Event was held on November 4 at the 4-H building in Ipswich.

Election Day was November 6 and the county pretty much reflected the statewide results in the two major races. Kristi Noem is the governor-elect after defeating her Democrat rival Billy Sutton. And Dusty Johnson, a Republican, overpowered his opponent Tim Bjorkman for the U.S. House of Representive’s seat vacated by Noem in her gubernatorial bid. Jerome Schaffner won the District 3 County Commission race and incumbent Commissioner Bob Olson won another term. And the District 23 S.D. legislative seats were each won by their respective incumbents, Justin Cronin in the Senate and Spencer Gosch and John Lake in the House.

The Snow Queen Contest, sponsored by the Ipswich Commercial Club, was held on November 10 at the school theater and Aleah Steger was crowned the Queen as well as Miss Congeniality. The senior first-runner-up was Abigail Grabowska.The Ipswich Junior Miss is Emily DeRaad. That pair of winners will represent Ipswich in the state contests coming up in January. Meanwhile, the Mystery Snowman was Joe Hoyle.

The Ipswich Legion was busy during November. It hosted a Veterans Day program in the school theater and then sponsored a November 25 Medora Concert in the same location.

The Ipswich School Theater had also been the site of the second annual “Ipswich Has Talent Show” on November 20.

A benefit for Mike Williams following his lawn-mower accident was held on November 30 at Holy Cross Hall. There had also been a “Moolah for Mike” benefit fundraiser at the school. And Farm Rescue had pitched in to help with Mike’s fall harvesting.

The fall sports programs were history, but not the post-season recognition. Abby Grabowska received her share of post-season volleyball attention including being named to the second-team Class B All-State listing. She was also invited to play for the North during a South Dakota North vs. South All Star match and more recently was named to the Aberdeen American News All Area team. And don’t forget football! Ipswich/Edmunds Central’s Carter Heinz, a junior, was named to the 9A All-State Football Team as a defensive back and Daniel Braun was honorable mention. And those were just a few of the fall-sports accolades for IHS athletes, almost too numerous to mention. But we should mention that the KELO Cup was awarded to Ipswich in Class B for having the highest combined ranking for all statewide competitions during the 2017-18 school year.

And still speaking of sports, both the Ipswich girls and boys basketball team have won five games so far as of our newspaper deadline. (The girls were 5-1 and the Tiger boys 5-0.) And the wrestling number have improved somewhat over the past couple of years, but the Tigers still would like to fill even more weight classes.

Meanwhile, the Ipswich Commercial Club ushered in the holiday season with a “Hometown Holiday Weekend” promotion, featuring Ipswich area businesses and organizations. This took place on December 6-7-8 and included a Friday evening Christmas tree lighting ceremony at the courthouse, including a caroling band. It was very well attended and so was the Saturday Highway of Hope Holiday Fair which attracted many bargain hunters looking for that special Christmas present.

Also on December 8 an Ipswich baritone player, Kari Kanable was selected to play in the North Area Honor Band in Aberdeen. The month of December also included various area concerts, including the Elementary School concert in Ipswich, followed by the Middle School/High School concert.

The Ipswich Commercial Club sponsored its annual Christmas lighting contest. The winners were Religious: Lynette Kraft; Fun and Festive: Tiffany and Ethan Hannasch and Best Use of Lights: Greg and Brenda Geditz.

The Ipswich Fire Department has received a $5,000 grant from Northern Border Pipeline.