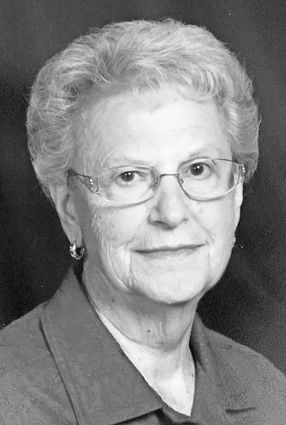 Marcella M. Thomas, 86, of Aberdeen, and formerly of Roscoe, passed away Wed-nesday, January 2, 2019, at Angelhaus in Aberdeen.

Marcella M. Heilman was born March 29, 1932, in Bowdle to Lawrence and Regina (Heilman) Heilman. She was raised on the family farm near Bowdle and attended country schools.

Marcella was united in marriage to John P. Thomas in Bowdle on June 28, 1954. The couple made their home on a farm near Roscoe, and Marcella worked as a prep-cook at Donnie's Restaurant in Roscoe for several years. In 1993, they moved to Aberdeen, where Marcella was employed at The Flame Restaurant as a prep-cook and also as a housekeeper at St. Mary's Rectory. She also made wedding and birthday cakes out of her home.

Marcella and John shared over 56 years of marriage and raised three children before he passed away on December 30, 2010. In 2016, Marcella became a resident of Angelhaus in Aberdeen, where she continued to reside until the time of her death.

Marcella was a member of the Altar Society in both Roscoe and Aberdeen. In her spare time, she enjoyed making crafts and loved spending time with her grandchildren.

Marcella was preceded in death by her parents, three brothers, and three sisters.