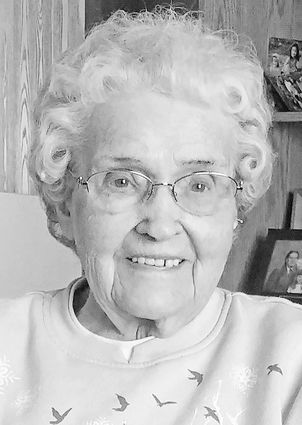 Matilda (Voegele) Kiesz was born March 8, 1921, to Christ and Katherine (Kapp) Voegele on a farm near Roscoe. She was one of 12 children who grew up on that farm. She attended school in Roscoe, but since her parents couldn't afford to send all of their children to high school boarding school, she later as an adult earned her high school G.E.D through Northern State University.

She married Reinhold Kiesz from Hosmer on October 8, 1939, at Hope Lutheran Country Church. They farmed the Kiesz Homestead for 41 years before retiring in Aberdeen in 1980. While raising their family, they were active members of St. John's Lutheran Church in Hosmer. She taught Sunday School, Bible School, and Saturday School, was an active member of the American Lutheran Church Women, and sang in the church choir for over 40 years. Her other activities included Extension Club, 4-H Club, and supporting the many activities of her children in the Hosmer School District.

In addition to working on the farm, she worked at the Hosmer Senior Citizens Nursing Home for 14 years, first as a nurse aide and then later as the Activity Director. When they moved to Aberdeen, she continued her work as an activity aide at Bethesda Nursing Home for three years.

She became a member of Bethlehem Lutheran Church in Aberdeen in 1980 where she was part of the Ruth Circle and the Piecemakers quilting group.

Matilda was known as a very excellent cook, baker and vegetable gardener. When on the farm, her home-cooked meals with fresh farm produce were praised by many. Later in retirement, people would look forward to her German kuchen or other desserts. She had a love for music starting early in life, when she and a close friend would perform duets, complete with costumes, at various functions. She supported all of her children in piano and other musical pursuits, especially singing. Matilda loved sports, particularly baseball. She continued to watch Twins baseball games even in her late 90's.

Matilda is remembered as a very kind, faith-filled woman with a subtle wit, who was an excellent example of one who was not afraid to roll up her sleeves and work hard. She was a blessing to her family.

She was preceded in death by her parents, Christ and Katherine Voegele; her husband, Reinhold Kiesz; son-in-law, Peter Kirkpatrick; 10 sisters; one brother; and two sisters in infancy.