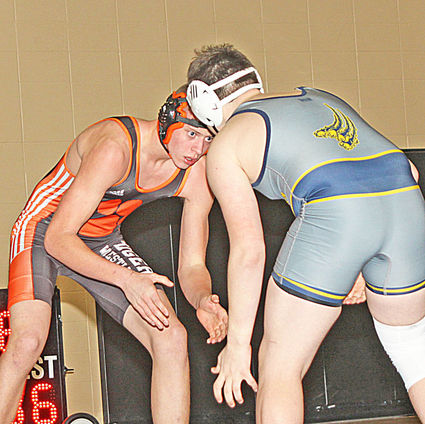 I/L/B's Zach Geditz eyes the competition in the Tigers' match with Warner/Northwestern in the Ipswich auxiliary gym.

Due to the weather a Lake Region Conference (LRC) wrestling meet was moved to Ipswich instead of Leola last Thursday.

The Tigers gave Faulkton a competitive battle though losing 42-30. The Tigers had earlier lost to Warner/Northwestern in their initial match.

They were also scheduled to attend an event in Warner last Friday, also involving the host team along with Sisseton, Britton-Hecla, and Potter County, as well as a meet in Miller Tuesday night. Results were not available at press time.