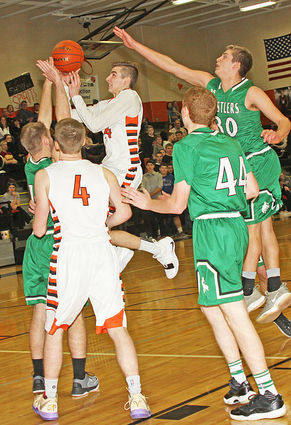 Jadon Onken goes up for a shot.

Ipswich hung around within striking distance, though and indeed drew to within eight points, 62-54 on a Carson Simes layup down the stretch, but the game clock would soon become the visitors' ally.

Miller had led 28-15 with a high-powered opening-quarter shooting display. But Ipswich signaled its own intentions with a second-quarter 19-12 rally. Maxwell Geditz featured all 10 of his points during that quarter, helping draw Ipswich to within two possessions, 40-34, at the halftime break. (The visitors then led 62-49 with a quarter to play.)

Will Kadlec led Ipswich with 13 points, including a trey. Featuring two treys, Geditz was joined in his 10-point scoring effort by two other 10-point scorers, Simes, who also included a pair of three-balls and Onken, who contributed one trey. Next for Ipswich was Jacob Nierman with seven points, including a trey and then came Reece Moehlenbrink and Ty Kadlec with six points apiece. (Kadlec featured his team's remaining trey and Moehlenbrink five of his team's 22 assists.)

Miller utilized a game-high 31-point scoring effort from Karst Hunter. Spencer Fernholz was next with 21 points and Tyler Schumacher also reached the double-figure scoring plateau with 15 points. Only two other Rustlers scored, Joey Simpson with five points and Garrett Knox with four.

Ipswich indeed had eight treys; its visitors, seven. But the visitors fueled their win with a 46-21 rebounding edge, despite four by Ty Kadlec in a balanced effort. Ipswich only committed 11 turnovers; Miller, 15, Eight of those happened courtesy of Tiger steals, led by four by Ty Kadlec.

The Ipswich boys will host Sunshine Bible Academy on February 7 in the Tiger Den and will then join the Lady Tigers for a road trip to Sully Buttes a night later.