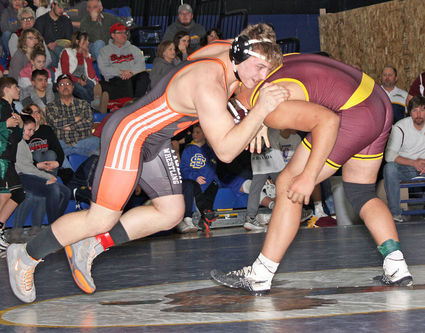 Junior Carter Heinz, 20-11, will again represent Ipswich/Leola/ Bowdle (I-L-B) at the State B wrestling tournament on February 22-23 in Rapid City. This year Heinz will wrestle at 195 against Preston Norrid (a 24-9 sophomore) of Winner Area in his opening round of action.

He accomplished that by placing second at the Region 1B meet in Redfield last Saturday and second-place wrestlers will each face a third-place opponent in their initial action at the State B. (Top regional finishers wrestle against fourth-place regional opponents at the B.)

Heinz obtained a forfeit win to start off his regional bid, then manufactured a semifinal pin of Joey Hubsch of Webster Area in 3:30. But he was defeated 10-1 in his championship match by Redfield grappler Barrett Wren. 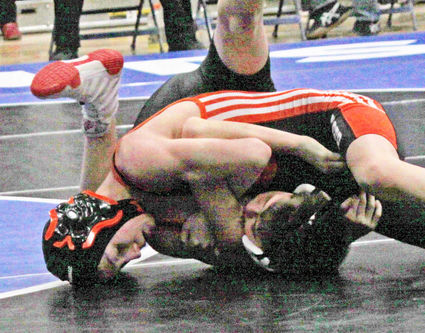 Brady Unser getting a pin

He obtained 18 of the Tigers' 29 team points in the region, helping them to a 11th-place team finish among 14 teams. Redfield Area edged Sisseton 164.5 to 137.5 for the team title. Three other teams dented the 100-point barrier, Clark/Willow Lake with 131 points, Webster Area with 113 and Potter County with 101.

Ipswich/Leola/Bowdle also obtained seven team points from Brady Unser at 106. The other four points were earned by Parker Gill at 113.