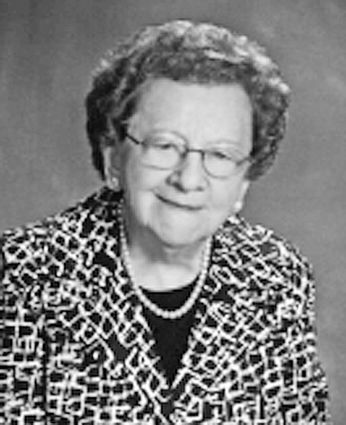 Leone Schaible was born to Fred and Eva (Gutjahr) Schaible on July 27, 1922, on the family farm, four and a half miles southeast of Hosmer. This is the area where she grew up and attended school.

Leone married Boas Spitzer of Long Lake on August 13, 1950. They lived on the family farm four miles east of Long Lake. From this union, two children were born, Lester and LaVonne.

In 1969 they moved to Aberdeen where Leone worked as a cook at the Ward Hotel and the Aberdeen Country Club. She also took care of her son, Lester, who was left paralyzed following a car accident. Lester died April 6, 1975.

Her husband, Boas, died July 22, 1988. Following his death, Leone went to work as a Foster Grandparent at both Avera Child Development Center and Northern State University Child Care Center. She did this for 27 years and loved every minute of it. She also provided care for her daughter, Judy, who suffered from MS. Judy died December 19, 2010.

Due to failing health, Leone moved out of her house in June of 2015, and resided at Primrose until December 2017, when she moved into the nursing home. She resided at Bethesda Nursing Home until the time of her death.

Leone was a member of Trinity Lutheran Church of Aberdeen. She enjoyed gardening and growing flowers. She loved babysitting her three grandchildren who loved her dearly. Later in life, she enjoyed her great-grandchildren as well. Leone never met a baby or child she didn't love.