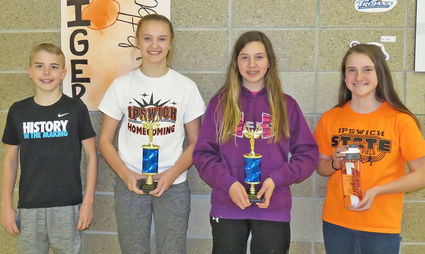 Ipswich students arrived at the NSU Barnett Center that morning along with 14 other schools from around the area. After setting up their boards, students waited 30 minutes before the first round of interviews began. Each student was interview by a minimum of two judges and some had three.

After everyone is interviewed, the waiting began again as awards were not announced until 6 p.m. "Overall, the students had a great experience, with opportunities to visit with other students, NSU faculty/staff, and see the excitement that science can generate," said science teacher Laurel Schambel.

Ipswich Middle School students demonstrated that they could compete with the best area schools and come out on top.