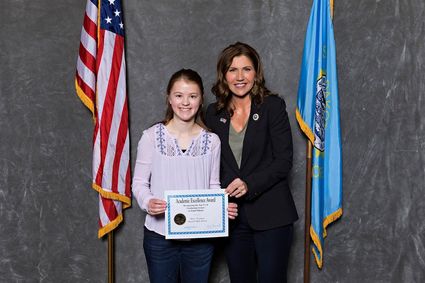 The best and brightest from the Class of 2019 were honored for their academic achievements at the 29th Annual Academic Excellence Banquet in Pierre on Monday, April 29, 2019.

In conjunction with Gov. Kristi Noem, the Associated School Boards of South Dakota invited more than 200 students, who were identified as the top one percent of their senior class, from the state's public, private and tribal schools, to celebrate their academic accomplishments.

"These students represent the best and the brightest in South Dakota," ASBSD President Tom Farrell said. "They have worked hard for their grades and demonstrate the excellence our schools have taught them."

"Today, we celebrate academic excellence, and this is what it looks like," he said.

Gov. Noem tabbed the students being honored as South Dakota's "next generation of leaders" and urged them to continue striving for excellence.

"All eyes are on you," Gov. Noem told the students. "You are the best and the brightest. The one thing that will pull you ahead of the pack is a work ethic."

"Lead by example," she said.