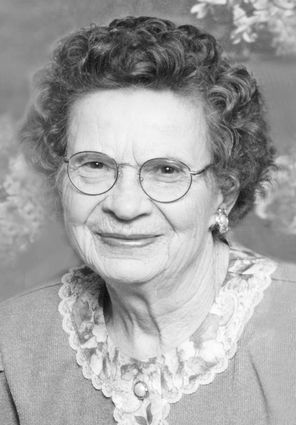 Genevieve Mary Kadlec was born on March 27, 1924 to Joe and Mary (Stulc) Kadlec near Loyalton. This is the area she grew up and attended school. Genevieve started her education a year early to attend with her brother. The first year of school was difficult for her because she did not speak any English at the time, as she was accustomed to speaking Bohemian. She graduated from Loyalton High School in 1942. Following high school, she was employed with the ASCS office in Ipswich where she worked until marriage.

Genevieve was united in marriage to Keith Nash on June 17, 1953, at Holy Cross Catholic Church in Ipswich. Their union was blessed with four sons and one daughter. The family made their home in rural Chelsea, where the family farmed for many years, raising chickens, beef cattle, dairy cows, pigs and horses. She was often seen carrying feed pails and milk buckets to feed the livestock. Genevieve and Keith relocated to Aberdeen in 2009. Keith passed away on January 31, 2015.

In her spare time, she enjoyed tending her garden, crocheting, knitting, reading and doing crossword puzzles. Genevieve and Keith loved square dancing and watching the Minnesota Twins together. Genevieve had a natural ability with numbers and grammar and kept books and did the family taxes for many years. She was a wonderful cook. She was known for her Kolaches and making an Angel food cake for everyone on their birthdays.