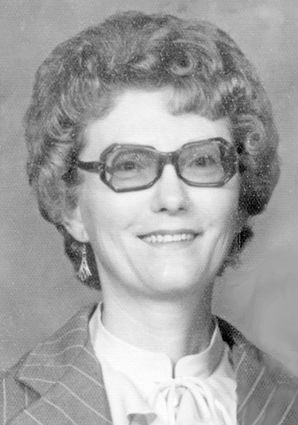 Lorraine Anna Kukrall was born July 2, 1929 to Joe and Anna (Kadlec) Kukrall on the family farm in Montpelier Township, Edmunds County, as all her siblings were.

She attended first through eighth grades at the one-room country school house one mile from the farm, walking across fields and pasture – rain, shine or snow. Lorraine attended high school at Loyalton until the school closed. She finished her senior year at Ipswich, graduating with the class of 1947.

She furthered her education at Northern State Teacher's College, after which she taught in rural schools in Edmunds and Faulk counties. Lorraine loved teaching, and many students have visited and kept in touch over the decades.

Once, while driving to Faulkton, upon passing the long-abandoned Reed School, she remarked that was the only school she taught at that had an indoor toilet – a chemical toilet in the basement. Posh to be sure, as someone from the county came to clean it once a week.

In 1962 she was hired as a substitute postmaster in Wecota, later becoming the Wecota postmaster herself, and was in charge of closing it. She then began working as a postal clerk in Cresbard in 1976 and was appointed to be the postmaster in 1983. Lorraine retired in 1990.

Lorraine married Dale Gebhard on June 2, 1952 at the Roscoe Presbyterian Church. Their first year was spent living with "Pa" Gebhard on his farm adjacent to Norbeck. They moved a small house to Wecota the following year, adding on to it several times. After Dale moved into the nursing home they sold their home. Lorraine moved into an apartment in Faulkton, then into assisted care at the Meadows, and then into Faulkton Senior Living last July.

Her faith in her Lord and Savior was most important to her. She was a faithful member and supporter of Immanuel Lutheran Church in Wecota, and she was a member of the Lutheran Women's Missionary League.

She enjoyed sewing, canning fruits and vegetables, making pickles and jams, crossword puzzles, playing scrabble and cards. Later in life Lorraine took up oil painting and was a very accomplished artist. Visitors were usually astonished when told that all the art in her apartment was by her own hand.

Preceding her in death is her beloved husband, Dale Gebhard; parents; and brothers: Wilbert, Rene, Clarence, Willard, and Roy.

Luce Funeral Home of Faulkton has been entrusted with Lorraine's arrangements. http://www.familyfuneralhome.net