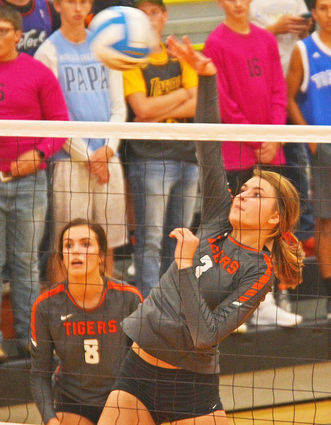 Paige Mehlberg (3) sends the volleyball back over the net in last week's action. Hailey Bierman watches the action.

Ipswich split two homecourt non-conference high school volleyball outcomes last week. The Ipswich Lady Tigers were defeated 3-0 by their Groton area counterparts on Tuesday evening and two nights later edged Waubay/Summit 3-1. In this one the visitors won the (first) battle 25-21, but eventually lost the war. That's right, Ipswich swept the next three sets -- 25-13, 25-19 and a hard-fought 27-25 victory to clinch the match 3-1.

In that latter win, Paige Mehlberg launched a kill for the set and match point. This set was last deadlocked at 25-25. Ipswich then scored two straight points includ...