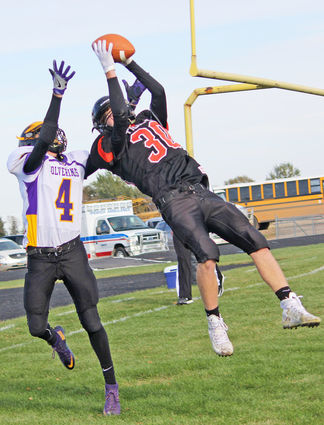 Tiger Josh McQuarie (30) catches a pass in the end zone for six during the Tigers win in Ipswich Monday.

Playing under ideal weather conditions on Monday afternoon starting with a 4 p.m. kick-off, thanks to last Friday's weather-related postponement, the Ipswich/Edmunds football team dominated visiting Herreid/Selby Area 22-0. And that handed the Wolverines team only its second loss of the season!

Ipswich/EC seemed to control the line of scrimmage both offensively and defensively, while playing nearly errorless football. It was a different situation for the Wolverines, though, losing five fumbles plus one pass interception for a total of six costly turnovers. "Yes, our line played great tonight," said Coach Brian Hogie. "It helped to control the game for us."

The Tigers' defense, meanwhile, bent, but certainly didn't break. For starters, Ipswich/EC held on downs at the Wolverines' 44-yard line, stopping the Wolverines opening possession and the I/EC offense generated a lengthy drive of its own, capped by a 12-yard touchdown pass from Ethan Gilbert to Josh McQuarie and a Carter Heinz PAT catch from Gilbert for a 8-0 Tiger lead with 5:41 remaining in the opening quarter.

And it would have been all the Tigers would need, as their defense indeed pitched a shutout. But they added a second-quarter scoring opportunity with 8:42 left in the opening half. That drive was initiated by the defense holding on downs at its own 31. This time-consuming drive was successfully completed by a 13-yard touchdown carry by Carson Gohl. The PAT play failed, though, leaving the host up 14-0 going into halftime.

The Tigers were able to burn a lot of clock during the second half, still leaving I/EC up by that 14-point margin with a quarter to play. And they were eventually able to nail down the win with a fourth-quarter insurance scoring drive, culminated by a Gilbert to McQuarie TD hook-up of 29 yards and a conversion pass play from Gilbert to Jordan Richardt, as well. The game was then turned over to the reserves by both teams in the final 3+ minutes.

Ipswich/EC featured a 249 to 212 total offense lead, including a 7-14 passing effort from Gilbert for 109 yards. (McQuarie caught the pair of TD passes for 39 yards, while Ty Kadlec was next with 34 aerial yards, followed by Matthew Hettich with 27 yards and Eric Severson with 14.) Gohl ended up as the Tigers' leading runner with 74 yards. Heinz added 38 yards and Kaden Hix was also in double figures with 22 ground yards.

Ipswich/EC earned eight first downs and the Wolverines 10. (They were 4-12 through the air for 62 yards with that one interception and added 150 yards on the ground.)

The afternoon obviously produced a balanced defensive effort, led by Severson with 11 tackles, Hix with eight, McQuarie also with eight and Luke Peterson with seven.

That huge win improved the Ipswich/EC season record to 4-4 and was crucial for the Tigers' play-off fortunes, according to Hogie. "It looks like we will end up number three in the region and head to the #two seed on Oct. 24," he explained. Before that, though, the Tigers will play their remaining regular-season game -- a non-conference road trip to Sully Buttes on Friday, October 18.