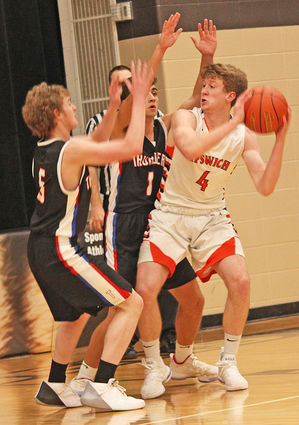 Will Kadlec (4) in basketball action in the Tiger Den last week.

Ipswich hosted the North Central basketball teams for a girls/boys Lake Region Conference clash on Tuesday, Dec.17 and the Tiger boys came away with a 62-36 varsity win.

The host school jumped out to a 21-6 opening-quarter lead. (The game had been initially tied at 2-2 with the NC's Bryce Beitelspacher's lane drive in response to an IHS game-opening layup from Maxwell Geditz.) The game was also tied at 4-apiece, as Ipswich's Will Kadlec got into the scoring act, countered by a Kaden Hix basket. And the Thunder would shortly gain what would prove to be their lone lead of the night at 6-4, th...