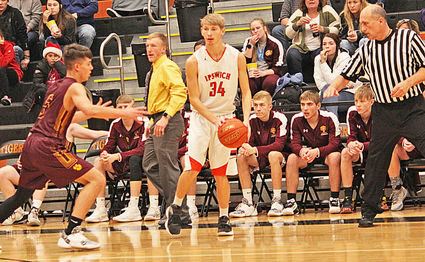 The Ipswich boys' basketball varsity hit a barrage of last-minute three-point baskets to keep things interesting for the home town fans in attendance at a girls/boys non-conference twinbill vs. Webster Area. The contest was eventually won by the visiting boys 71-66 on Saturday, Dec. 21 in the Tiger Den.

The Tiger boys had trailed by as many as 13 points, 60-47, a little earlier in the final stanza. But they regrouped with a furious late rally, started by a Ty Kadlec trey to shave Ipswich's deficit to ten points (60-50) and he then finished with another trey at the final buzzer, still leaving the Tigers two possessions short, as the game clock had quickly become Webster's best friend when the Tigers needed to foul for possession. Will Kadlec added a trio of treys down the stretch and Jordan Richardt yet another late trey, as a timely back-court steal or two didn't hurt the Tiger cause either.

Ipswich had narrowly won the opening quarter 17-16, thanks to a Will Kadlec buzzer-beating layup. And Richardt's buzzer-beater at intermission drew Ipswich to within six points, 29-23. Will Kadlec then added a late third-quarter trey to leave Ipswich down 42-38, entering the final quarter.

Coached by Ipswich alum Kyle Braun, Webster obtained four double-figure scorers, led by Braden Holland with 19 points. Jaydon Keller was next with 16 points, followed by Kalab Marx with 13 and Blaize Schmimmel 11. Two other Bearcats scored. They were 29-55 in total floor shots, including six treys and were 7-14 in free throws.

Ipswich countered with Will Kadlec's game-high 28 points, which included that quartet of treys. Ty Kadlec finished with 14 points, totaling three treys and Ethan Gilbert was the Tigers' only other double-figure scorer that day with 10 points, including a pair of treys. Richardt finished with five points including his trey. Next was Taylor Thorson with four points and Max Geditz with three points, followed by Josh McQuarie's basket. Ipswich was 23-63 in total floor-shot attempts, including its 10 treys. The Tigers were 10-16 at the line.

Ipswich utilized a narrow 40-38 rebounding afternoon, led by Will Kadlec's 11 retrieves for a double-double.