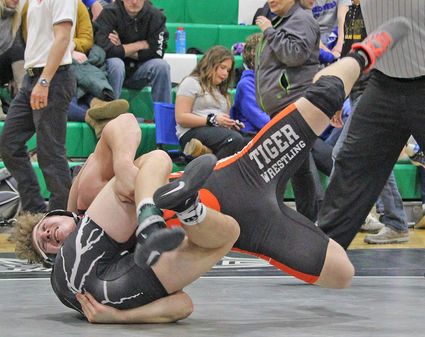 Carter Heinz in wrestling action in Miller on Jan. 12.

The Ipswich Area Wrestlers returned to action at the Miller/Highmore/Harrold Invitational on January 12 in Miller.

Only seven wrestlers competed due to injuries and illness, with six competing as part of the team and one wrestling unattached.

The team placed 15th out of 19 teams, placing three wrestlers, led by Carter Heinz's third-place finish. Tanner Frickson and Denver Wolff both placed eighth in their respective weight classes.  And Preston Martin returned to action unattached for the first time this season from a broken foot.  He and Wolff faced each other in the second consolati...