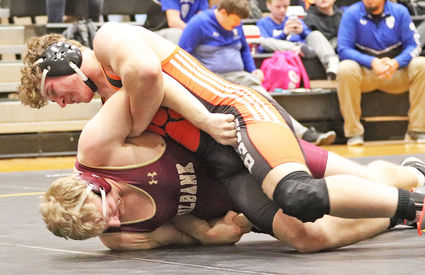 Carter Heinz was a champion in the Groton Wrestling Tourney on Feb. 1.

The Ipswich Area Wrestlers traveled to Groton for their final regular-season tournament of the year on February 1 and four of them received placements, led by Carter Heinz who placed first in his 195-lb. division.

Tanner Frickson finished second at 126, Brady Unser third at 106 and Matthew McCloud fourth at 182. This is the first time McCloud has earned a place on the podium in a varsity tournament in his career. Darrel Yost had a huge first-round win but was not quite able to make it to the awards stand at the end of the day. Parker Gill won her consolation-round wrestleback match to a...