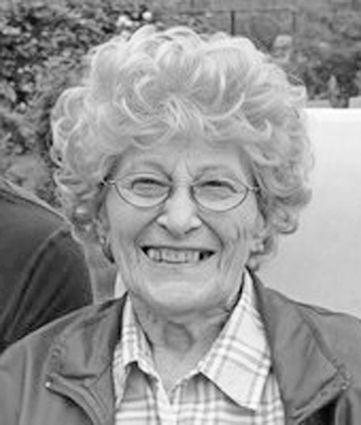 Mass of Christian Burial for Anna Mary Heier, 97, of Ipswich, was at 10:30 a.m. Saturday, Feb. 15, 2020 at Holy Cross Catholic Church in Ipswich. Burial was in the church cemetery.

Anna was born May 15, 1922 in Eagle Butte to Wendelin and Barbara (Marquardt) Dosch. Her early childhood was spent on the original homestead, nine miles south of Eagle Butte. When she was 10, the family moved to a location two miles southwest of Parade. She attended country school in Parade and graduated from Eagle Butte High School. She was a member of All Saints Catholic church in Eagle Butte, active in choir and was the church organist.

After graduating from High School she worked at the Eagle Butte grocery store until it burned down in 1957. She moved to Rapid City and worked for Western Stationery until 1959 when she moved back to the family farm near Eagle Butte.

Anna married Joe Heier in 1962. Making their home in Ipswich, she worked part-time for the Edmunds County Assessor's Office and was the Food Stamp cashier from 1969 to 1996 for Edmunds County. She also did daycare in her home, giving care to 145 children over the years. She was famous for making fried bread and the kids clamored for it.

Anna moved to Aberdeen in 2017, residing at Davis Court, Nano Nagle Village and finally at Mother Joseph Manor. She spent her time visiting, reading, doing jigsaw puzzles and cheering for the Minnesota Twins. She adored her grandchildren and especially her great-grandchildren.

Anna was a member of Holy Cross Catholic Church in Ipswich. She was a member of the Altar Society, Lady Foresters, Legion of Mary and Legion Auxiliary. She was also an avid blood donor, donating over 40 units in her lifetime.

She is proceeded in death by her parents, husband Joe, brothers Raymond, Pius and Jerome.

Arrangements are with Gramm Funeral Home of Ipswich. grammfuneralhome.com