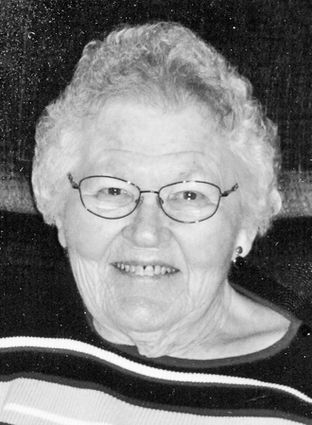 Dorothy Nell Pedersen, daughter of James and Lillie (Kissner) Pedersen, was born on April 12, 1934 in Faulk County, the oldest of six children. She was brought up north of Rockham and attended rural school. By her eighth grade year of school, her family moved to a farm just southwest of Ipswich. She completed her formal education at Ipswich High School, graduating with the Class of 1952. Dorothy then became employed at the Edmunds County Agricultural Stabilization and Conservation Service (ASCS) office.

Dorothy married Morris Ernst at Roscoe on June 4, 1960. They settled on the Ernst homestead four and a half miles west of Roscoe. Shortly following marriage, Dorothy resigned from the ASCS office and stayed on the farm where she and Morris raised four daughters. Morris died March 2, 1991. Dorothy remained on the farm, actively involved in its business. In January 2017 she became a resident of the nursing home in Ipswich (currently Avantara).

Dorothy was a faithful member of St. Paul's Lutheran Church in Roscoe where she taught children in Saturday School and was active in the Ladies Aide. She was also a member of the How and Why Extension Club. Following Morris's death, she assumed his position on the FEM Electric Board, which she held for a number of years. Dorothy also had an interest in politics, having served on many election boards and was active in the Edmunds County Democrats. She spent time sewing and quilting for family members and, in her later years, enjoyed doing crossword puzzles. Dorothy was a meticulous cook and baker, and her family will fondly remember the many holiday meals that she hosted.

In addition to her husband Morris, she was preceded in death by her parents James and Lillie, and two sisters Emily Sando and Linda Epperly.

Casketbearers will be her grandchildren.

Services are in care of Lien Funeral Home, Bowdle. http://www.MillerLienFH.com