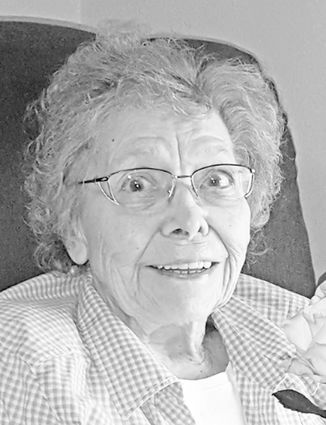 She was born in Walworth County to Fredrick and Katherine (Rieger) Schuh on December 26, 1928. She grew up on farms near Java, attended country school and graduated from Java High School in 1946. Marcella earned her teaching certificate from Northern State Teachers College and taught in a country school for a year.

Marcella married Hiram Biel on December 7, 1947 and they made their home on several farms in Campbell County where they raised two daughters, Peggy and Kathy. During the 1960's, she taught in several rural schools until Hiram was transferred to Ipswich with the Highway Department. She was employed by the Ipswich School as a paraprofessional, until retiring in 2003 at age 74. She took much pride in her work and everyone enjoyed her artistic ability when decorating the monthly bulletin boards at the school.

Hiram and Marcella enjoyed socializing with friends, playing cards and dancing the night away at Craven Corner.

They were members of the United Church of Christ in Ipswich.

Marcella was a great cook and baked the best Christmas goodies including butterhorns, kuchen, fancy breads and sour cream cookies. She would spend hours frosting and decorating them for the kids and grandkids to enjoy.

In 2003, she moved to Rapid City to be with her daughters. After a fall in 2017, Marcella was in assisted living at Victorian Senior Living in Rapid City. She passed away peacefully in the care of the Good Samaritan Society in New Underwood. Peggy and Kathy were there to shower her with tears of love and sadness in saying their goodbyes to "the best Mom ever".

She was preceded in death by her parents; husband, Hiram; grandson, Donnivan Schaeffer; brothers, Ruben, Wilmer, Norman and Larry.

Private family services will be Wednesday, April 1, 2020 at 10:30 a.m. at Kirk Funeral Home with Rev. Bruce Herrboldt officiating. Services will be Live Streamed on her obituary page at http://www.kirkfuneralhome.com. Private committal will take place at Black Hills National Cemetery near Sturgis. There she will be placed with Hiram, forever together in eternity.