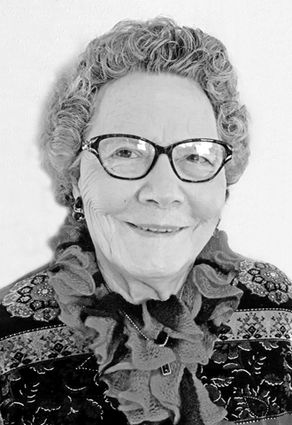 Private family funeral services will be at 11 a.m. on Thursday, April 30, 2020, at St. Martin's Lutheran Church in Watertown. Rev. Paul Janke will officiate.

Irene was born on January 31, 1930, to Lewis and Rose (Kadlec) Kukrall of rural Loyalton. Lewis passed away when Irene and her brother, Elmer, were very young. Several years later Rose married Lewis's brother, Peter Kukrall. Rose and Pete then had one son together, Melvin.

Irene had many fond memories of the three siblings growing up together on their family farm even though it was during the drought of the thirties. After attempting to shock grain with the shocks falling apart, Dad Pete suggested that maybe she should cook the meals for the harvest crew instead. She went on to become a great cook and later in life enjoyed entertaining family and friends for great home cooked meals and desserts.

Irene attended school in Liberty Township, where she was able to complete her finals for her seventh and eighth grade in the same year at the suggestion and encouragement of her teacher. She passed these two years with high honors.

Irene then graduated from Ipswich High School in 1947. After school hours in her senior year, she worked for H.L. Woodworth, Attorney at Law, and continued this job after graduation. In the fall of 1948, there was a shortage of teachers in Edmunds County. Superintendent Fred Dehnert then contacted Irene and convinced her to teach for one year at the Liberty View School.

On June 29, 1949, Irene married Earle L. Snyder in Ipswich. They lived in Aberdeen for one year while Earle attended Northern State Teachers College, graduating with a degree in Chemistry and Physics. They then moved to Rapid City, where Irene was employed at Penneys for two years. They lived in Rapid City for five years.

In 1952, their son Wayne was born who was their pride and joy.

They moved back to the Aberdeen area in 1954 where Earle finished his teaching degree at N.S.C. while Irene and Wayne stayed with her parents until he graduated. In 1955, Irene and Earle moved to Faulkton, where Earle taught math and science, while she took care of her family.

Her awesome cookies were enjoyed by Wayne and his friends many times after school before playing some pool in the basement. Another favorite hobby was gardening with Earle supplying many neighbors and family with fresh produce and canned goods. She watched over her parents, Pete and Rose, while they lived in a mobile home behind their home, and later, when they needed to go to the nursing home in Faulkton. She also cared for her mother-in-law, Mabel Snyder, in her later years both in their home and then at the nursing home. When her husband needed to go to the nursing home in Watertown, she went to see him every day from lunch until dinner, except for several days when she needed a pacemaker. Her family was definitely her number one propriety in life, which we will all miss tremendously. She has been an excellent role model for her family with God and her family being her top priority.

Irene and Earle sold American Family Insurance for a number of years making it possible for their son, Wayne, to get his medical degree and training while his wife, Gail, was able to stay home and raise the grandchildren. Earle and Irene truly adored all of their grandchildren and great-grandchildren. For several years in a row they sponsored trips to the Black Hills, getting several cabins so the whole family could enjoy quality time together for a week.

Irene and Earle were members of the Powell Presbyterian Church which was located 10 miles south of Ipswich. Later when this church closed, they became members of the United Church of Faulkton. When Irene moved to Watertown after Earle passed away, she became a member of St. Martin's Lutheran Church where Wayne and Gail are members.

She was preceded in death by her husband, Earle; her parents, Lewis Kukrall, Pete and Rose Kukrall; her brothers, P.F.C. Elmer Kukrall and Melvin Kukrall; along with her sister-in-law, Janet Kukrall.

Funeral services will be live-streamed. Music at the service will be provided by Carla Lindhorst as organist with Pastor Paul Lindhorst as soloist.