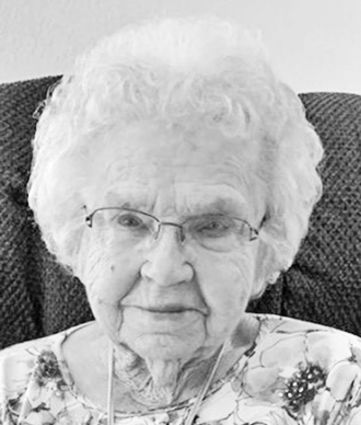 Esther Preszler, formerly of Roscoe, passed away on May 4, 2020 in Hudson, Wisconsin.

Esther was the fourteenth of 15 children born to John and Magdalena Weishaar on the family farm located northeast of Hosmer. Esther married Ervin Preszler on October 12, 1941. They lived on a farm west of Hosmer from 1942 to 1945. In the spring of 1945 they moved to a farm west and north of Roscoe where they farmed and raised their family.

Esther and Ervin were active members of the United Church of Christ in Hosmer.

In April 1997 Ervin passed away. Esther then moved into the town of Roscoe and lived there until October of 2014 when she moved to Aberdeen. Due to declining health Esther moved to an assisted living facility in Hudson, Wis., in Sept of 2019. In January 2020 she moved to Christian Community Home where she lived until her death. Esther was the last of her siblings to pass away. She also lived the longest - 97 years.

Esther enjoyed working beside her husband farming, dancing, playing cards (especially Pinochle), visiting with family and friends and occasionally fishing walleyes on the Missouri river with Ervin. She was a master cook and baker. Her pickles, kuchen, and homemade bread were delicious. Embroidering dish towels was also an enjoyable hobby for her.

She was preceded in death by her husband, Ervin; her parents; siblings; son-in-law; and one great-grandchild.

Services entrusted to the O'Connell Family Funeral Home of Hudson, Wis. and the Gramm Funeral Home of Ipswich. Condolences and memories may be shared with the family at grammfuneralhome.com.