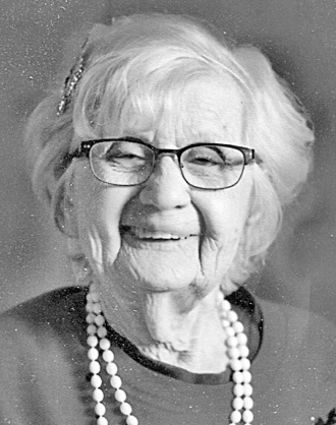 Edna Violet Geist, daughter of Pauline (Aman) and Leo Geist, was born at Roscoe on July 15, 1931. Edna attended school in Roscoe and married Milbert Schumacher on November 14, 1948 at Roscoe. She was employed at the drug store in Roscoe. Milbert died April 19, 1972. Following Milbert's death, Edna worked at the café in Roscoe, was a cook at the Roscoe School, did lots of housekeeping for Roscoe area families, and worked at the Adee Honey Farm in Roscoe. She retired following back surgery in 1986. She continued living in Roscoe until 2012 when she relocated to Aberdeen.

Edna will be remembered as a great cook.

Casketbearers will be Edna's great-grandson, Dylan; her grandson, Brandon; and Travis Dewald and Richard Strehlow.

Services are in care of Lien Funeral Home, Bowdle. (www.MillerLienFH.com)