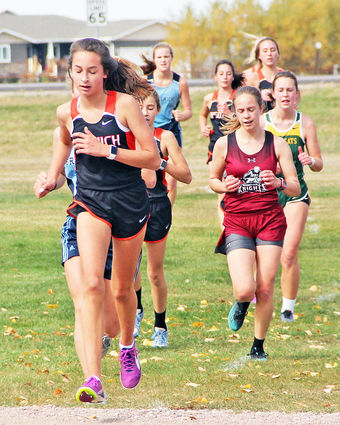 Ashlinn Hartwell, left, finished fifth. Several Ipswich runners can be seen behind her at this point in the race at the Split Rock Golf Course in Ipswich.

Ipswich finished in second place in both the girls and boys varsity team standing at the Lake Region Conference cross country meet last Wednesday in Ipswich. The LRC is known to be competitive in just about any sport you name and that was true here Wednesday, Oct. 7.

But individually there were two impressive varsity winners that day. On the girls' side Northwestern's Ella Boekelheide out-ran the competition in 20:02.24 with Frederick Area's Morgan Sumption second in 20:28.03. For the varsity boys Warner's Cody Larson simply out-distanced the field with his 15:48.20 effort. (The runner-up, Faulkton's Hunter Niederbaumer, was a very distant second in 17:18.31.)

In girls' middle-school team scoring, Ipswich finished second behind Northwestern. (The Wildcats had 12 points and Ipswich 15.) Aberdeen Christian was third with 24 points. The individual winner was also from Northwestern in the person of Tara Blachford with a 13:08.33 clocking. Ipswich's Katelyn Tufte was third in 13:58.07, followed by Anna Nierman fifth in 14:01.22 and Bella Unser tenth in 16:33.32. Kierstin Pietz rounded out their effort with her 11th-place 16:40.67 effort.

The boys' middle-school outcome was won by Aberdeen Christian's Luke Kaiser in 11:20.01. Ipswich had three competitors in that race, led by Clayton Horst in 14th in 13:17.21, followed by Tyler Gellhaus 17th in 14:08.52 and Jon Kintz 18th in 14:34.55. That helped produce 37 team points for the youthful Tiger boys, placing them fourth in the middle-school team standings. Faulkton won it 13 to 14 over Frederick Area with Northwestern third with 28 points.

The regionals were set for today Wednesday, October 14 in Gettysburg, starting at 1 p.m. The state meet will be held in the Rapid City area on October 24.