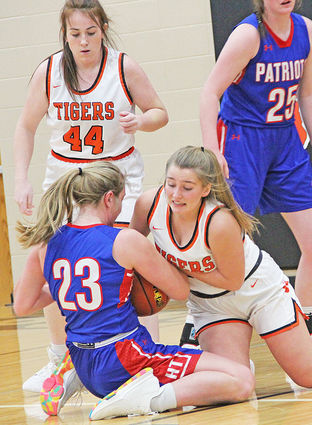 Bailey Pitz battles with Patriot Madison Hofer (23) for possession of the ball in the game in the Tiger Den on Saturday. Kate Geditz (44) looks on.

The Ipswich girls' basketball team improved to 2-0 with a convincing 51-30 win over Hitchcock-Tulare here Saturday.

The visitors sort of stayed with the Tigers in the early going, trailing only 11-9 despite a Halle Heinz buzzer-beater. But the IHS contingent came out firing on all cylinders with an 18-2 edge in the second stanza.

Ipswich's initial double-figure lead was 21-9 thanks to a Bailey Pitz trey.

And after leading 29-11 at the half Ipswich also won the third-quarter scoring battle 14-8 and coasted to the win.