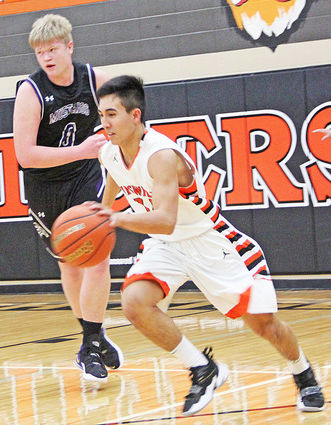 Matt Hettich heads down the court in the Tiger Den followed by a Waubay/Summit defender.

What more could you ask from a close game other than maybe an overtime or two? But the Ipswich boys indeed held on to stave off Waubay/Summit 54-53 last Saturday in Ipswich.

And it was that close to an OT. Josh McQuarie gave the Tigers a late 54-52 edge, giving the visitors a last possession. It would result in a visiting player being fouled, sending him to the line. The first one did find its target, but the second foul shot attempt narrowly missed with no opportunity for an offensive rebound putback and the Tigers celebrated their narrow win.

The score was tied six times and the lead ch...