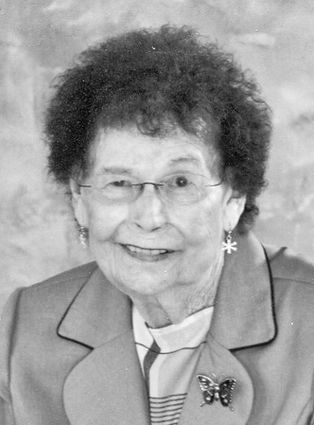 Phil, daughter of Katherine (Binfet) and Philip Stappler, was born July 27, 1926 10 miles north of Onaka, Hillside Township, Edmunds County. Phil received her formal education at Hillside N. Rural School. Following her schooling, she stayed with her parents on the farm, boarded in Ipswich, where she was employed at the CC Café, and also worked as a hired girl in Aberdeen.

Phil married Roy Heintzman at St. John the Baptist Catholic Church in Onaka on September 30, 1947. They settled on a farm they purchased six miles northeast of Onaka in Edmunds County. This is where Phil lived the rest of her life. Phil had a strong work ethic and, as a farmer's wife, she helped many years on the family farm alongside Roy.

She was a member of St. John Catholic Church in Onaka and Christian Mothers. Phil and Roy traveled extensively in the US and abroad. In her later years, Phil enjoyed coloring, word search, and reading. She was known for her cooking and baking, enjoyed dancing and pinochle, and was passionate about her family history. Primarily, though, Phil loved and cherished her family. They were the most important people in her life.

She was preceded in death by her father, Philip, on November 21, 1952; her mother, Katherine, on August 21, 1951; two brothers, Jakob and Peter (in infancy); five sisters, Mary Leboldus, Josephine Goetz, Julia Goetz, Catherine Gabriel, and Ida Sicosky Keene; and two grandchildren, April Lunders on July 5, 1986 and Adam Lunders on June 4, 2011.

The organist was Rhonda Strouckel. Mass Server was Wayne Heier, and lector was Tina Jensen. Phil's children placed the pall on her casket and offertory gift bearers were Morgan Whalen, Jack Means, and Sam Means.

Services are in care of Lien Funeral Home, Bowdle. The funeral will be livestreamed on the Lien Family Funeral Care Facebook page and at http://www.MillerLienFH.com.