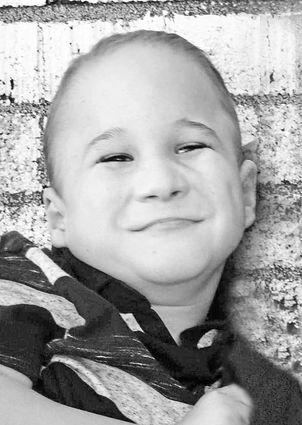 Tate Christian, son of Barbera (Thomas) and Lance Kaiser, was born at Aberdeen on December 26, 2012. His entire life was spent with his parents, brother, and sister on their farm 11½ miles south of Bowdle. Although Trisomy 13 kept Tate from doing things other kids his age did, he was gifted in a special way. He had an amazing ability to bring joy to people and, as his parents said, Tate could make bad days melt away. No matter how much Tate had stacked against him in life, he always had a smile on his face.

He enjoyed being outside, hanging out with his family, and loud noises (Netflix was too quiet for him). He loved attending school and was a member of St. Augustine's Catholic Church.

In addition to Lance and Barbera; Tate is survived by his sister, Mackenzie; his brother, Gage; and grandparents, Vern and Nancy Kaiser of Tolstoy and Norbert and Cathy Thomas of Bowdle.

He was preceded in death by great-grandparents, Reuben and Leona Bollinger, Adam and Jennie Thomas, Albert and Frances Kaiser, and Frank and Christina Peterson.

Honorary bearers will be Tate's classmates-the Second Grade Class at Bowdle Elementary; and his caregivers at the school.

Casketbearers will be Luke Kaiser of Tolstoy ,; Colton Thomas of Bismarck, N.D., Tyler Berndt and Mason Berndt of Aberdeen, Cody Lunders of Bowdle, and Trenton Denief of Fayetteville, Ark.

Offertory gift bearers will be Tate's cousins: Belle Lunders, Ashley Lunders, and Heidi Miller. The Lector will be Jerry Brickner and Mass Server will be Isiah Heilman. Pianist will be Margy Bobby and usher will be Pat Dewald.