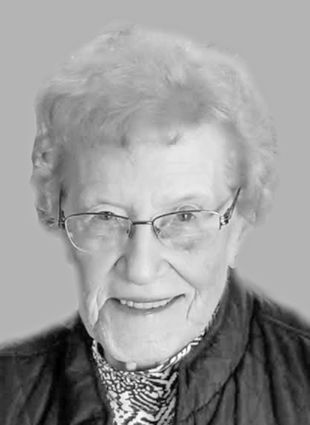 Visitation 5-7 p.m., Thursday, at the mortuary with a liturgical wake at 7 p.m.  Visitation continues one hour before Mass at the church Friday.

Helen (Toots) Ochs was born June 10, 1932 in Ipswich. Helen was the youngest of Joseph C. and Pearl (Adler) Ochs' nine children. She grew up on the family farm near Ipswich, graduating from Ipswich High School in 1950. Upon graduation, Helen went to work for the County Superintendent of Schools in Ipswich, then later for Production Credit Marketing (Edmunds Co.). In June of 1953 she married Louis Thares at Holy Cross Catholic Church. They resided in Ipswich for the next 50 years and raised four children before moving to Aberdeen in 2003. Since 1991 they have spent most winters in Green Valley, Ariz.

Helen was active in the Holy Cross Church Altar Society and was a member of the American Legion Auxiliary for 64 years. She was also an avid seamstress, sewing most of her kid's clothes, and was a great cook. Helen most enjoyed time spent with her family on numerous vacations and camping trips. She was a three-time cancer survivor with a generous heart and a courageous spirit.

She was preceded in death by her parents, Joseph and Pearl Ochs, two brothers and six sisters.

In lieu of flowers donations can be made to the Brown County Relay for Life or the American Cancer Society.

Family and friends may sign the online guestbook and also view the service at http://www.schriversmemorial.com.