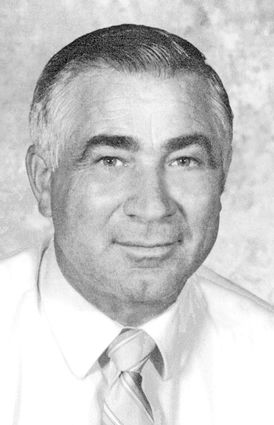 Mass of Christian Burial for Harvey Frank Hammrich was Monday, June 21, 2021 at 9 a.m. at the Holy Name of Jesus Church with Father John Fischer as celebrant. Burial was at St. Mary's Cemetery, Watertown.

Harvey Frank Hammrich was born October 10, 1934 to Jacob Joseph and Mary Ann (Biegler) Hammrich on the family farm near Ipswich. He attended Holy Cross Catholic School and graduated from Ipswich High School in 1954. He went on to get a bachelor's and master's degree from South Dakota State University (SDSU). While at SDSU he played football, baseball, and basketball on a full ride scholarship. He was also on the 1952 Ipswich State Basketball team. Harvey was also drafted by the St. Louis Cardinals for baseball but went to the Army instead. While in the Army, Harvey served as a Medic.

While at SDSU he met his soul mate, Juanita Rose Novak. On August 6, 1962 he married Juanita Rose Novak in Arlington. They lived in Eureka from 1962-1965 where he was a football coach and taught social studies. The couple moved to Webster in 1965 where Harvey was a social studies teacher, football coach, golf coach, middle school principal, and an athletic director. They then moved to Watertown in 1977 where he was an Athletic Director. He was very proud of the program he built as Athletic Director in Watertown. The depth of his program was proven every year by winning almost every year "the all sports competition" award given by the ESD Conference as Athletic Director at Watertown.

Harvey received many awards throughout his lifetime, including selection twice both Athletic Director of the year and state award of merit as well as NHSACA National Athletic Director of the year. He was inducted into the SDHSCA Hall of fame in 1995 and the SDHACA Hall of Excellence in 1997. Hammrich received both the SDHSAA and NIAAA distinguished service awards and the NFHS citation award, He also received the SDIAA Hall of Fame in 2006 among many other awards too numerous to mention.

Harvey was a social guy and loved all people. He would always take time to visit with you even waiting for his meal at restaurants which annoyed his family but is the main reason he was loved by so many people. You would always find him with a group of his friends and at all the athletic events. He enjoyed life, people, and sports. He loved spending time with his grandchildren and going to all their events. Those events where not always sport related. Harvey was an avid sports fan and enjoyed all sports and it showed with the quality program he built in Watertown as Athletic Director.

For those that knew him you will know this but for those of you who don't – Harvey was the 10th kid born on the 10th day in the 10th month at 10 o'clock. So we would always hear him say that he is a perfect 10. And dad, we KNOW you were a perfect 10!

He loved to have coffee with his friends each day and he sure loved his "Quarterback Club" on Wednesday evenings.

Harvey now joins his wife, parents, and siblings in heaven where I am sure he is at "Quarterback Club" at this very moment.