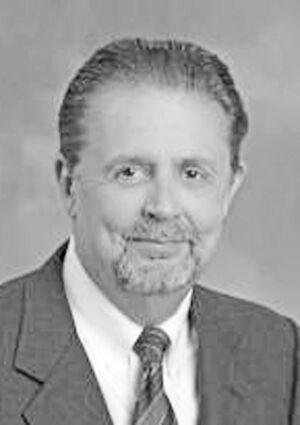 Edward James Engler, 74, 51st mayor of the City of Laconia, N.H. and co-founder and president of The Laconia Daily Sun, died on November 5, 2021.  The cause of death was colon cancer.

Ed was born at the community hospital in Ipswich on June 8, 1947. He was the first child of Donald and Iona Engler. Ed graduated from Ipswich High School in 1965 and then matriculated to the University of Texas at Austin, where he was awarded a Bachelor of Journalism degree in 1972. At college, Ed met his future wife Suzanne Binkley, of Houston, and the couple was married on June 22, 1973.

Ed and Suzy raised two children. Laura was born in 1976 and Brian in 1986. The close-knit family was devastated by Suzy's premature death due to illness at age 45.

Known by those closest to him as a sappy sentimentalist, Ed reveled in fond memories of his isolated, small-town upbringing and the influence that attending a huge university in a faraway place he had never visited had on his life. The older he grew the more he loved his hometown, his native state, his alma mater, and Texas.

Ed's business career started with a job as a creative copywriter for a Houston advertising agency. In 1977, Ed and Suzy decided they wanted to be in business together and started the weekly Kingwood Observer newspaper in a suburb of Houston. The couple sold that modestly successful newspaper in 1980 and began a decade-long family odyssey that took them to the states of Washington, New Hampshire, Colorado, and back to New Hampshire.

After a five-year stint as publisher of the Golden Transcript in Colorado in the mid-1980s, Ed and family moved to Madison, N.H. in 1987 and he began a 13-year tenure as associate publisher and general manager of the Carroll County Independent and the Granite State News. In 2000, he moved to Laconia and, with two business partners, started publishing The Laconia Daily Sun. The free daily newspaper struggled mightily in its formative years, but evolved into a very successful small business enterprise. Ed served as the paper's publisher for 12 years and was editor from 2002-2015.  He was also elected to and served three terms as mayor of Laconia (2013, 2015, 2017).

A memorial service/celebration of life will be held in the spring.  He will be cremated and buried at Bayside Cemetery in Laconia.  Contributions may be made in Ed's name to the Colonial Theater restoration project (via check made out to CACLR in care of BCEDC 383 So, Main Street, Laconia, NH 03246; coloniallaconia.com) or the W.O.W. Trail (P.O. Box 6832, Laconia, NH 03247; wowtrail.org).