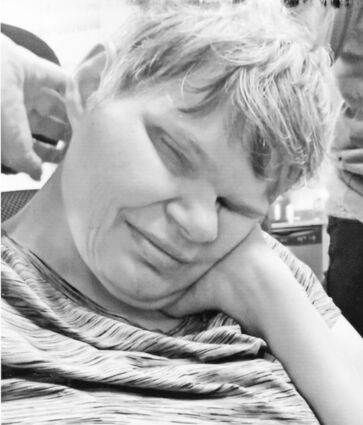 Beverly Dee Opp was born to Richard and Edna (Waelhof) Opp in Aberdeen, on July 9, 1953. After being born premature, she and her twin brother Bruce resided on the family farm near Roscoe. Later she became a resident of the South Dakota Developmental Center at Redfield, then was relocated to Custer Developmental Center, then transferred back to Redfield. She became a resident at Aspire in Aberdeen in 2006 where she resided until the time of her death.

"Bevy," as the staff lovingly called her, enjoyed being pampered with lotions, perfumes, and getting her fingernails polished. She liked her chocolate, getting her arm tickled, and listening to music. Car rides and ice cream were also a favorite. She loved giving and receiving hugs and kisses.

Throughout her difficult life, she touched many lives and taught us all how to appreciate the norms of everyday living. Since her arrival at her Aspire home, she became an important and loved resident by the staff. They shared in the many enjoyable mannerisms she developed over the years. We are so grateful for the excellent care she received from all her caregivers.

She is survived by her sister, Sandra Hauck of Aberdeen; twin brother, Bruce (Jackie) Opp of Roscoe; seven nephews, and great-nieces and nephews.

She was preceded in death by her parents, Richard and Edna; step-mother, Irmadell Opp; and a brother-in-law Roger Hauck.