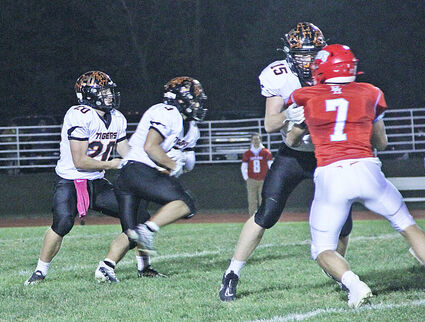 Tyler Hettich (3) takes off moments after IHS quarterback Ian Beyers (20) gave him the football. Darrel Yost (15) blocks for the runner in the Bon Homme stadium in Tyndall.

The hosts would receive a 30-yard TD pass from Riley Rothschadl to Landon Bares plus a PAT kick by Easton Mudder to get on the board. They would add a short carry into paydirt by Rothschadl the quarteback followed by a PATs pass from Rothschaldl to Isaac Crownover.

They added an early second-quarter touchdown run by Jackson Caba of 10 yards with a PAT kick by Crownover which would put the hosts ahead 22-0. And if that weren't enough, they got yet another Rothschadl TD carry of 60...