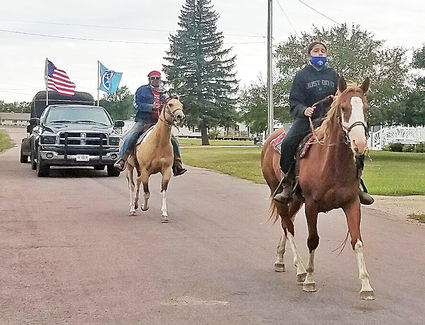 A group of riders rode into Ipswich Monday on horseback. The Native American riders and supporters hope to bring awareness during the week-long ride.

The group, made up of people of all ages, left Crow Creek on August 28. They are planning on arriving at the Whitestone Hill State Historical Site, southeast of Kulm, N.D. on Sept. 3.

Jim Hallum of Santee, Neb., one of the group, said they want to bring awareness and healing during the memorial ride.

The Whitestone Hill Site is called a battlefield, but Hallum said it really was the site of a massacre.