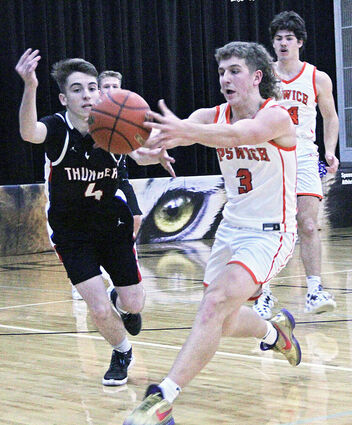 Ian Beyers battles for control of the basketball in the Tiger Den last week against North Central.

The Ipswich Tiger boys' basketball team salvaged a girls/boys doubleheader split vs. North Central in their LRC league twin-bill on December 14 in Ipswich. The varsity boys indeed raced to a 56-24 victory over their Thunder counterparts, after the North Central varsity girls had up-ended Ipswich 35-30 earlier in the evening.

The IHS boys scored 26 unanswered points starting with a Trevor Beyers three-ball before the Thunder could even get on the scoreboard and Ipswich's initial double-figure lead was 10-0 during that run, thanks to a Ty Kadlec layup.

Ipswich would finish the opening quarte...