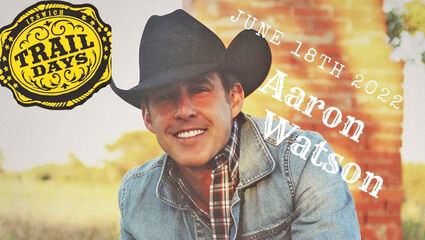 The Trail Days committee has announced that the 2022 concert headliner is Aaron Watson. The concert will be June 18, 2022 at the Trail Days Complex.

Watson is an American country music singer and songwriter. Active since 1999, Watson has recorded several independent albums in his career. His 2015 album The Underdog reached No. 1 on Top Country Albums that year, and in 2017, Watson had his first major radio airplay hit with "Outta Style", which reached top 10 on Country Airplay. He describes his latest album "Red Bandana" as old-school, but timeless. The Texan has forged a slow and steady...