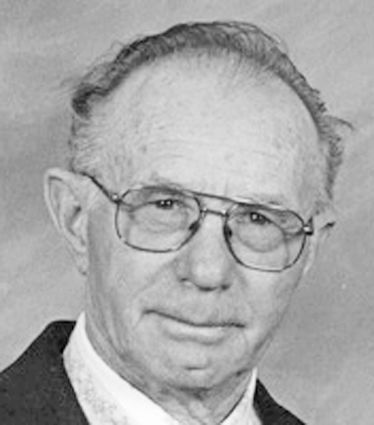 The funeral service for Clarence Kukrall, 94, of Loyalton, was at 10:30 a.m. Monday, June 11, 2018 at St. Paul Evangelical Lutheran Church in Roscoe. Interment with Military Honors was at 1:30 p.m. Monday at the Ipswich City Cemetery.

Clarence was born November 18, 1923 in Montepelier Township near Loyalton to Joe and Anna (Kadlec) Kukrall. He attended country school and farmed with his father four miles northeast of Loyalton.

Clarence married Doris Schumacher on October 24, 1956 at Roscoe. They made their home together on a farm southeast of Loyalton where they worked together raising all sorts of livestock and grains.

While Clarence tended to the farming, Doris worked tirelessly upholstering furniture for many area residents. He was always in awe of her talents and work.

Clarence found his peace on the prairie. The life of farmer suited him just fine. He loved caring for animals and eagerly awaited the grain harvest every year. His vacation was what others would call work. He simply loved being a farmer.

Clarence had served his community over the years as a township superintendent and by being on the St. Paul Lutheran Church Council where he maintained a lifetime membership. He was also a member of the local American Legion and an honorary member of the Palmer Lake VFW in Brooklyn Park, Minn.

Thankful for having shared in his life are his son, Wayne (Teresa) Kukrall of Loyalton; his daughter, Sharon (Robert) Rohrbach of Brooklyn Park, Minn.; two brothers, William (Joan) Kukrall of Aberdeen and Delano (Eileen) Kukrall of Ipswich; one sister, Lorraine Gebhard of Faulkton; five grandchildren and two great-grandchildren.

His parents and four brothers, Wilbert, Rene, Willard and Roy preceded him in death.