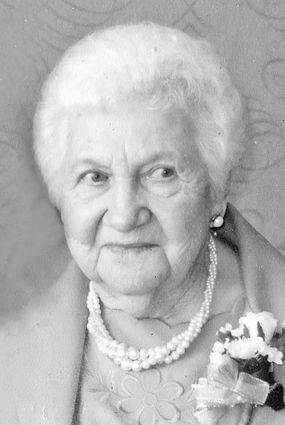 Hildegarde Lehr, 91, Aberdeen, died Monday, April 29, 2019 at her home. Funeral services were at 10:30 a.m., Friday, May 3, 2019 at Plymouth Congregational United Church of Christ, Aberdeen, with Pastor Tim VanderVorst leading the service. Interment was Friday at Morningside Cemetery, Roscoe. Hildegarde Eva Schaible, daughter of Eva (Gutjahr) and Fred Schaible, was born at her parent's farm southeast of Hosmer on October 16, 1927. She was raised on the farm and attended rural school. She then went on to Hosmer High School, from which she graduated in 1946.

Hildegarde attended a summer course at Northern State in Aberdeen and earned a teaching certificate. She taught for one year in Sangamon Township and one year at Bryant Township.

Hildegarde married Raymond Lehr on October 26, 1947 at Hope Lutheran Church southeast of Hosmer. They settled on Ray's farm four miles east and one mile north of Roscoe. In October 1974, they moved into Roscoe. Ray died October 20, 1999. Hildegarde continued living in Roscoe until relocating to Aberdeen in January 2016.

She was a member of St. James United Church of Christ in Roscoe where she had worked as janitor for many years. Most recently, she attended Plymouth Congregational Church. Hildegarde very much liked to be out in her yard where she grew lots of flowers. She also enjoyed crocheting.

Arrangements are in care of Lien Funeral Home, Bowdle. Visit http://www.MillerLien FH.com to leave an online condolence or to view Hildegarde's video tribute.