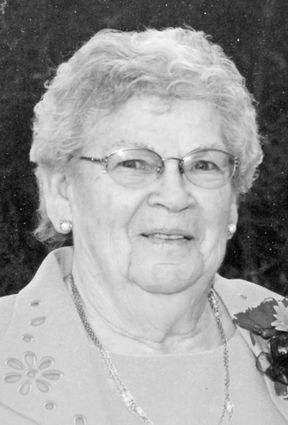 The funeral service for Gladys Marcella Beck, 90, of Ipswich and formerly of Herreid will be at 10:30 a.m., on Wednesday, June 5, 2019 at First Reformed Church in Herreid. Rev. Cody Schwichtenberg will officiate.

Burial will be in Artas Cemetery, rural Artas.

Gladys was born May 12, 1929 to Edwin and Lydia (Kautz) Zimmerman on the family homestead near Artas. Gladys was united in marriage to Floyd Beck on December 14, 1951 at Artas Baptist Church. Floyd completed his military duties on September 24, 1954 and then at that time the couple began farming two miles west of Artas where they were general farmers, raising livestock and small grains. Gladys and Floyd moved to Herreid in November 1994. They continued to work on the farm until they moved to Ipswich in July 2012. Floyd died February 24, 2017. Gladys entered Ipswich Care and Rehabilitation Center December 12, 2018.

Gladys and Floyd enjoyed traveling in their semi-retirement years. She was also very talented at sewing, cooking, baking and canning.

She was a member of Artas and Herreid First Reformed Church and Artas Ladies Aide. She was also a very active member and past president of Jacob Heinrich American Legion Post #170 Auxiliary in Herreid.

In lieu of flowers, the family prefers memorials to Herreid Community Foundation.

Carlsen Funeral Home of Eureka has been entrusted with arrangements. http://www.carlsenfh.com