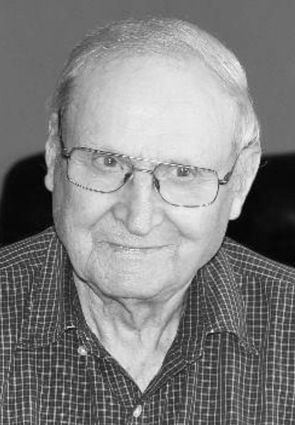 Paul was born in Rudolph on May 31, 1926. His family relocated their farm to north of Mansfield in 1929. He attended country school, then Warner High School through 10th grade, but boarded with his Grandma and several cousins in Aberdeen to attend Central and be in marching band. He farmed with his dad and brothers through high school and shortly after before serving in the army in 1946. Paul was sent to Japan and Korea but was released into the reserves the next year. The army called again and he spent two years in Korea in 52-53. Paul then farmed with his brothers in southeast Edmunds County. In 1958 the bachelor farmer married Joy Holz, the new country school teacher down the road. They were married 62 years and had five children.

He was an active member of the Richland Church and devoted to his family, and loved working with his brothers. He was a farmer who could fix almost anything. He saw and worked through a lifetime of change in ag, from horses to modern equipment and technology and was always ready for the next new idea. He liked to read, loved music, saying words backwards, whistling, and John Deere equipment. Paul was a generous quiet man, with a witty sense of humor. He loved watching Aberdeen Christian boys' basketball.

He was preceded in death by infant son Kevin; parents Will and Lorraine; brothers, Melvin, Elton, Dale, Wayne; and sister Mae.

The family prefers memorials to the Richland Church or Aberdeen Christian School.

Arrangements by Spitzer-Miller Funeral Home, Aberdeen. The service has been livestreamed on the funeral home website. https://www.spitzerfuneralhome.com