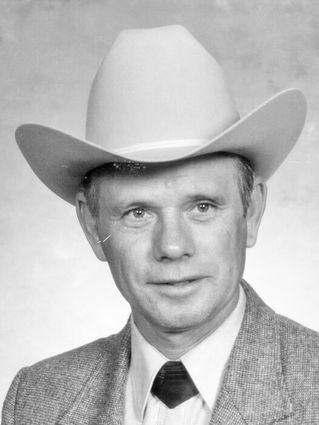 Another cowboy has come to the pasture, liked it and stayed...

Clarence Dominic Kessler was born Nov. 1, 1937 to Peter and Magdalena (Usselman) Kessler at Mina. He started school at a country school near Mina but when he was 10 years old the family moved to Aberdeen where he attended St. Mary's Catholic School.

As a youngster, he would spend weekends working on a farm. As a young man he continued to work on the Kessler Ranch. During those years he gained a love for horses. A love that would later lead him to raise World Championship Show winning Quarter Horses.

He bought a farm in 1962 and married Marlene Janice Hettich of Roscoe on October 24, 1963. They lived on the farm where Clarence became a jack of all trades. He ran a dairy operation, raised beef cattle and continued to refine his stable of horses. His work raising horses was respected across the nation, with buyers visiting the farm from nearly every state in hopes of owning one of his horses. Clarence never enjoyed being in the spotlight, instead he quietly built his reputation amongst horse show faithful.

Being tied to the land as a hard working rancher, there was little time for outside activities, but he did manage to take his family on just one family vacation to Garden City, Kansas. A trip that is fondly recalled by his children. He was an active member of the American Quarter Horse Association, Leola Trail Riders (where he was famous for a taking mud bath) and Our Lady of Perpetual Help Catholic Church.

Ten years ago, Clarence suffered a traumatic brain injury in a four-wheeler accident and his life was forever changed. His abilities were limited but he held true to the cowboy way and never left the ranch.

Clarence will be interred privately in the Kessler family plot at St. Mary's Cemetery in Aberdeen.

Arrangements by Gramm Funeral Home, Ipswich. Memories may be shared with his family at grammfuneralhome.com .