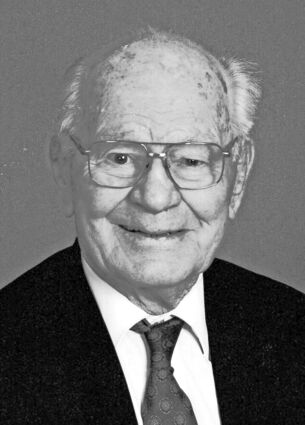 Allan Albert Gab, son of Katie (Stotz) and Jacob Gab, was born four miles southwest of Hillsview on October 30, 1923. He was brought up on the farm, attended rural school through eighth grade, Bowdle High School for two years, and Eureka High School, Class of 1942. He then farmed with his dad. Allan married Winnie Goehring at Hosmer on June 20, 1948. They settled on a farm nine miles west of Hosmer. This is where Allan lived until January 2020, when he relocated to the Bowdle Nursing Home. Allan retired from farming in 1986 and then spent 20 years as a rural mail carrier, retiring in 2006.

He was a faithful member of St. John's Lutheran Church, where he taught Sunday School for many years and served on the council. He was an avid reader and briefly took up downhill skiing at age 72.

Services are in care of Lien Funeral Home, Bowdle. Allan's funeral was livestreamed on the Lien Family Funeral Care Facebook page and is available http://www.MillerLienFH.com.