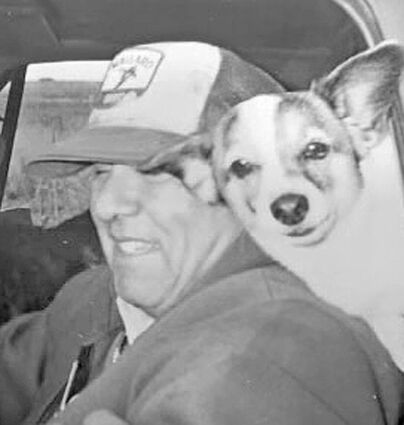 Bob was born on June 21, 1930 on the family homestead to Peter Geditz, Jr. and Josephine (Sindelar), the first of 14 children. His early school years were at a country school not far from the family farm and he graduated from Ipswich Public School in 1948. Dad's nickname was "Bowz", a name he received from his father. In his youth, he enjoyed playing football, baseball, and track. He did well at running the 220-yard dash.

Dad worked on the family farm while growing up until being inducted into the Armed Forces in 1951, earning three Bronze Service Stars and attaining the rank of Corporal. He served his country willingly and patriotically. He was honorably discharged in 1953. Following serving in Korea, Dad attended Northern State College where he earned a degree in teaching.

After graduating in 1957, he married Lillian Lacher. They moved to Beaver Creek, Minn. where Dad taught English for a year. He came to a decision that farming was more his passion, purchasing a farm not far from his family's farm. Dad was a steward of his farm land and had a green thumb for sowing a large garden. He was especially skilled at growing carrots and sharing what he grew with relatives and friends. He was very fond of farm animals including cattle, pigs, chickens, dogs, and cats. During his years on the farm, Dad and Lilly raised 12 children. Following Lilly's passing in 1978, he worked tirelessly to continue to raise his children on the farm, instilling in them a desire to learn and a sound work ethic.

After retiring from the farm in 1997, Dad moved to Ipswich volunteering at Holy Cross School through the Foster Grandparent Program to help children learn to read, another great passion of his. He also volunteered for blood and bone marrow drives in his retirement.

Dad was jovial, had a sense of humor, and could lighten up a room with his laughter. He was known to family, friends, and townspeople as a kind, unassuming, and gentle man. He loved spending time with his children, grandchildren, and great grandchildren.

Dad was a member of Holy Cross Catholic Church, having led the choir, and was a Men's Forester. He had a deep, Catholic faith. Dad was a novice poet, having an excellent ability to craft words when writing. He was an amateur astronomer and meteorologist, rooted for the Yankees and Buffalo Bills, and had a passion for playing many different card games but especially Whist.

As was his fervent wish, Dad remained in his home until his death being cared for by his family, the Avera Hospice team, and was grateful for the spiritual guidance he received from Father Smith. Dad passed away peacefully on November 28, 2021 surrounded by family.

Preceded in death by his wife Lillian, his parents, his brother James, and several in-laws.

Because Dad taught us the importance of working hard and giving to others, the family is not requesting memorials. Rather, consider doing something kindhearted for your neighbor, such as offering a meal, a visit, or simply a smile. In the words of Dad, his message to each of us would be to "Play it Cool" and enjoy the simple things in life as there are many.

Arrangements by Gramm Funeral Home, Ipswich. Condolences and memories may be shared with his family at http://www.grammfuneralhome. com .