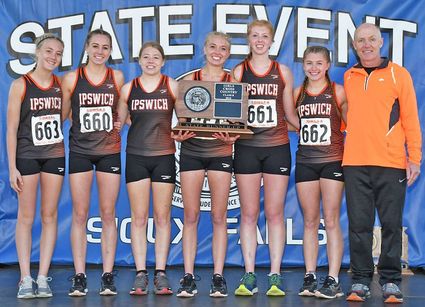 The Ipswich Lady Tigers finished second in the girls' State B cross country team standings last Saturday in Sioux Falls for the second year in a row, giving them a 4-win, 2-runners-up record at the B during the six years that the current seniors have been eligible for varsity status.

"The girls have raced against 99 teams at the state meet and their 6-year record is 97-2," says IHS head coach Todd Thorson. "An example would be this year there were 20 girls teams (at the State B), so their record was 18-1. Same with their total record over six years (337-19)."