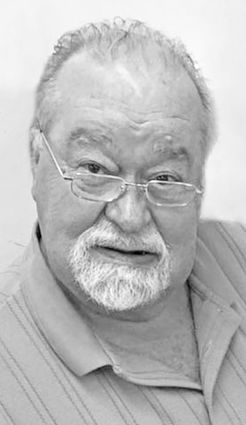 The good Lord took us all by surprise when He took our dear friend, George Mohr, home with Him on the morning of November 21, 2018.

All his life, George has been a staple in the small community of Hosmer. He and Mary Jo Heier were married on January 5, 1974. He wore many hats in the community of Hosmer over the years, but nowhere was he more known than in the Farmer's State Bank, where he happily celebrated his 50th anniversary this May.

George's two great loves in life were people and food, and he brought his two loves together whenever he could. He enjoyed fishing with his children, cooking, gardening, rummage sales, giving gifts you didn't know you needed, and sending loads of trinkets, books and care packages to his granddaughter Josie. He died doing what he loved.

If we ever wondered what the roads were like on a snowy day, we called George, who knew if we should drive or not. Whether you knew him for five minutes or 60 years, George always had a few minutes and a few pieces of candy to share. He was a good friend to all who knew him, and a loving husband, father, son, and brother who wanted nothing more than to see those he loved happy. There is no doubt he was taken from us too soon, and his absence will be deeply felt by all. Forever jolly and ready to laugh, it is only fitting that George be remembered with smiles in our hearts and full candy dishes on our desks.

George is survived by Mary Jo, his wife of 44 years; his children, Justin Mohr of Eden Prairie, Minn., Megan (Reverend Kelly) Smith of White Lake, Wis., and Owen Mohr of Hosmer; and by the other pea in his pod, his granddaughter, Josie Smith (age 5). Also surviving are two brothers, Leroy Mohr of Lawton, Ia. and Robert (Karen) Mohr of Mitchell; and three sisters, Kathy Opp of Eureka, Janet Mohr and Iva Mohr of Aberdeen.

In lieu of flowers, the family asks that donations be made to your local food bank in loving memory of George and his need to see that everyone was well fed.

Arrangements were in care of Lien Funeral Home, Bowdle. Online obituary at http://www.MillerLienFH.com .